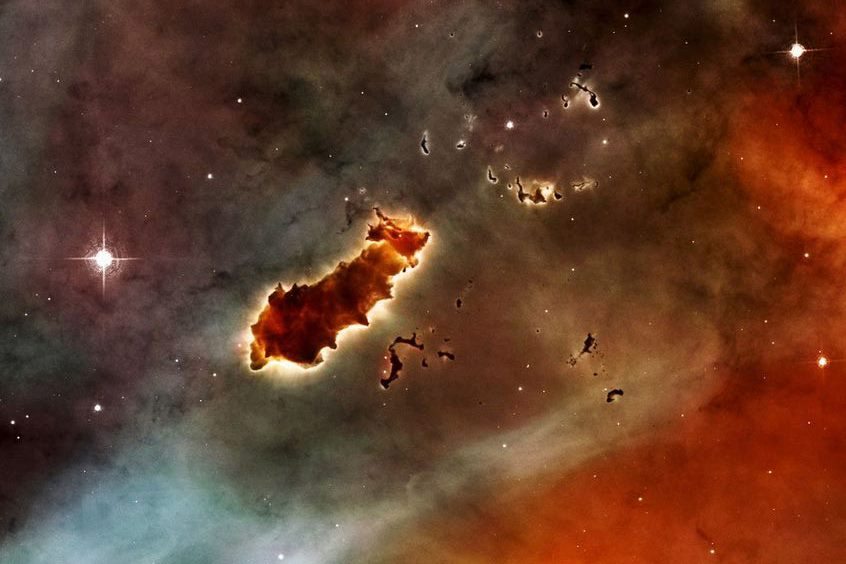 All we usually do is talk about new discoveries in astrophysics, and we forget a little too often, to remind people what we have understood with the utmost of certainty.

What we have learned is of incomparable beauty and perfection.

There is not only the harmony of the orbital dance of satellites, planets, stars. But also the way in which energy is continuously transformed and how it sometimes determines the birth of new stars.

For example, I never get tired of marveling when I think of what happens when the shock front of a supernova crosses the interstellar medium (made of dust and gas). If there were no dust and gases in the interstellar space, the shock wave of a supernova would manifest itself only in the form of mechanical energy, and long afterwards, following the initial flare, there would be nothing left: no remnant. Instead things go very differently, because, wonderfully, the Universe feeds on itself, also making so that new stars are born from the death of other stars. And we owe this to the existence of the interstellar medium. Once it is compressed by the supernova shock wave, due to the principle of conservation of energy part of the mechanical energy is transformed into thermal energy which in turn is transformed into radiative energy because the interstellar medium is compressed, and dragged as a snow plow would do with snow, it warms up and shines (sometimes even in X-rays) to form remnants like the Crab Nebula.

But special situations also occur, depending on the value of the density of the interstellar medium and how the matter is distributed in space.

And this distribution is actually uneven, often with so many condensations of matter. When these condensations are reached by the shock front of a supernova that sweeps the interstellar medium at 10,000 km/sec, two scenarios occur. If within these globules the density decreases going towards their center of symmetry they literally evaporate, for the simple reason that the compression of the external envelope violently increasing their temperature due to the overpressure they end up giving rise to a reversed shock wave (a kind of implosion) which by heating the globule causes it to expand adiabatically until it is completely cooled. If instead the density of these condensations increases towards the center then once they are hit by the supernova shock wave in the course of the compression they can reach a critical mass that allows gravitational collapse, which then determines the formation of new stars. The new births depend on the existence of the interstellar medium and the death of other stars (as it happens for high-mass stars when they enter into the supernova final phase): dust and death generate new life together. And so the Universe feeds itself harmoniously: a perfect thermodynamic machine.

If we did not have the infinitesimal calculus (for example, the differential equations in partial derivatives of hydrodynamics, but not only those) given to us mainly by Leibniz some centuries ago, and the modern observation and measurement techniques, we could have never known these things. And we only knew them because we understood them.

Just to show an example on how we proceed with fluid mechanics calculations on supernova remnants and their shock wave, here  is a link to my step by step ancient calculations.

Pictured above:  interstellar blobs in the Eta Carinae Nebula

Totemtag is an electronic music project by Dr Massimo Teodorani