An important congress that occurred in 2010 that explored the potential connections between anomalous atmospheric phenomena and seismic precursors. This a collaborative work in progress that is led by Dr Valentino Straser and Dr Massimo Teodorani.

The issue of “anomalous atmospheric phenomena” is rarely treated using the scientific method, but rather it is most often reduced – and not-seldom merchandized – to a well-known popular “tale”. Such a fanciful approach has, in general and so far, moved scientists away from considering and examining these phenomena – which still belong to the borders of science – with the necessary attention and accuracy. Despite this, scientific and critical studies on this subject do exist, in which a strong potential for a fruitful increase of our knowledge has been identified. Following this philosophy three scientists have decided to meet each other in order to share their experiences in their specific fields. This has been an occasion to show how the study of anomalous light phenomena demands a strongly interdisciplinary approach and an intensive idea interchange in order to establish what is known so far and which research projects are necessary in order to answer to the still many open problems.

The main goal of this very particular research is to furnish a full scientific explanation of atmospheric phenomena whose main characterization seems to be the production of a quite high amount of energy. The “energy factor” is probably the most significant quantity of the physical world that surround us, and the fact that we are able to measure this important physical parameter using the appropriate measurement instrumentation gives potentially to us the possibility to reproduce in a lab what we observe in nature. This is the normal manifestation of the direct application of the scientific method, the only one that we know so far and that after a few centuries of Galilean science has demonstrated to be able to produce concrete, objective and relevant results, which have permitted us to increase our knowledge of the world that surround us and, consequently, to improve the technology that assists us in our life.

Anomalous atmospheric phenomena are just out there in order to trigger the interest of science, and past human history has shown only too often that when science is inactive and unresponsive concerning certain phenomena, an uncritical approach and, more generally, the irrational tend to prevail by producing non-negligible damages to our society. Whatever is maintained in the darkness of our knowledge can be a potential danger for us. That’s the reason why the light of reason must necessarily penetrate everywhere. The physical study of anomalous light phenomena certainly offers a sound intellectual trigger in order to realize this approach and its main goals.

That’s the main reason why a geologist, an aerospace engineer and an astrophysicist decided to reunite together in order to discuss what we know so far on such phenomena and what is necessary to do in order to improve our knowledge on them. This happened in the course of two conferences, the first on April 21 and the second on May 18-19 of the year 2010. The scope of such two meetings was twofold: 1) to present research results and new ideas, and to discuss them in the ambit of an intensive scientific workshop that followed a few days after official public presentations; 2) to stimulate the interest of the public – including the scientific community – and to show that scientific researches on anomalous light phenomena do exist since a few decades and are presently going on.

The two scientific meetings were held inside cinema Lux in Fornovo, a nice little town located in the Taro Valley, close to the Northern Apennines, 23 Km south of the important town of Parma, in the western part of the Padana valley, North Italy.

These meetings would have never been possible without the precious support and hospitality of the local political and cultural authorities, in particular mayor of Fornovo Emanuela Grenti, deputy mayor Paolo Valenti, and former IBM engineer and CEO Andrea Pontremoli, who, on April 21, has been the irreplaceable and highly valued chairman of the first part of these meetings. Other local institutions such as the ITSOS C.E. Gadda Fornovo di Taro, the GeoLab Onlus, the Mountain Community, the Pro-Loco, and other individuals have preciously collaborated in rendering these meetings effective.

Why just in Fornovo? The answer is quite simple. This is a location, around which anomalous light phenomena are recurrently seen and reported since several years by local witnesses and tourists. Earth scientist Valentino Straser, who lives just 10 Km south of Fornovo, has been the main scientific scholar who, first, pointed out the importance of studying scientifically such phenomena occurring in this area, of which he has yet a deep knowledge from the geological point of view. Several recent researches of his – published on peer-reviewed scientific journals – demonstrate that atmospheric anomalous phenomena popularly known as “balls of light” show a strict link with the geological characteristics of the territory, and that they are amplified by tidal effects due to the Moon. Moreover, and most importantly, Straser has shown that the sudden apparition of atmospheric light phenomena is quite strictly time-correlated with seismic shocks and, consequently, that such phenomena may be considered as effective “seismic precursors”, of potentially great importance when population should be alerted before such events happen. Straser’s contribution to these Proceedings show how he reached these conclusions.

Similar light phenomena occur recurrently in several other quite well-known locations in the world, such as Hessdalen in Norway, Min-min in Australia, Marfa in Texas (USA), Brown Mountain (USA) and many others. Valentino Straser decided to invite one of the most important scientific investigators of these phenomena in the world, aerospace engineer James Bunnell, who since many years has been monitoring instrumentally light phenomena that occur very often in Marfa. Engineer Bunnell, who is presently using several measurement instruments after positioning them on a few observing stations in the valley of Marfa, after doing a very careful and accurate selection of prosaically explained cases, has done a quite important cataloguing work of anomalous light phenomena in his area. In his contribution Bunnell will discuss the results of his researches, also venturing some geophysical work hypotheses on the nature of the phenomenon under study.

Light phenomena cannot be studied accurately without investigating their possible intrinsic nature in terms of a physics approach. That’s the reason why Valentino Straser invited to both of the Fornovo scientific meetings a Ph.D. astrophysicist, Massimo Teodorani, who since 15 years has been investigating also this kind of phenomenon from a physical point of view and published his results on peer-reviewed international scientific journals. Dr. Teodorani has participated to several explorative missions to several locations of the world where such phenomena are recurrent, such as Hessdalen, Norway, the Arizona desert, USA, the Ontario Lake, Canada, and several locations in Italy. In his contribution he shows how astrophysical instrumentation and the investigative methods of fundamental physics can turn out to be of basic importance in order to study such phenomena using the necessary rigor. In particular, he describes accurately the way in which anomalous light manifestations behave from a physical point of view and discusses the results of his researches, the analytical methods, the possible theories, the open problems, the importance of facing and, in case, tapping the “energy factor”, and a really complete and pragmatic research project in order to permit science to uncover the still many misunderstood sides of this phenomenon.

Workshop sessions carried out during the two days following the second conference (the only one in which engineer Bunnell could be present), have permitted the three researchers to put together their ideas and to discuss them in depth, with the main goal in mind to improve this investigation in general and also, on the basis of the past acquired experience and mutual idea exchange, to launch a systematic research program to be hopefully concretely materialized in the short-term future in the specific case of the Taro Valley.

In addition to presenting the results of their specific researches on atmospheric light phenomena and in order to show how they normally operate in their specific fields, Straser, Teodorani and Bunnell have also shown publicly their competences in geology, astronomy and aerospace engineering. Bunnell, who has been for many years a prominent aerospace engineer at NASA, has described in detail how he acted during all the Apollo missions to the Moon, while he was intensively working as an engineer guaranteeing the optimum functioning of such missions directly from the Cape Kennedy space-launch base. Teodorani, on the basis of his own scientific experience, has given a presentation describing in detail how an astronomer effectively operates when he searches for extra solar planets, by showing how much mathematical rigor and precision are necessary in the fields of astronomy and astrophysics. These presentations were mainly aimed at the public who was attending these conferences, in order to show them the methodology that the three scientists normally follow in their specific areas of interest. The goal of these informative presentations was to show that exactly the same methodology can be applied also in the current investigation on anomalous light phenomena in a threefold way: 1) identifying the geological/geophysical (and even astronomical) causes that might trigger the onset of anomalous light phenomena on specific areas of Earth; 2) showing the methodologies used to measure such plasma-like phenomena in several wavelength ranges and to derive physical theories on them; 3) showing the scientific instrumentation that is used in order to carry out such measurements and the strategies that are normally devised in this specific field.

It is therefore hoped that the specific contributions present in these Conference Proceedings may trigger the interest of many more scientists, not only in order to demonstrate, firstly, the effective existence of such natural anomalies, but, secondly and most importantly, in order to show that such only apparently elusive phenomenon can be indeed measured and examined following the well experimented scientific method and its interdisciplinary way of approach. With no doubt, it is a factual and contingent evidence that several branches of science and technologies have to meet necessarily together in order to face, and possibly solve, a scientific problem like this which is by itself represented by a sort of “puzzle”, whose pieces may be recognized and put into the right place in order to reconstruct the final picture only if contributions of several aspects of natural and physical science can reach a truly productive interface. Hyper specialization alone is useless when a global vision of the problem is lacking. Lonely theorization is unproductive when a dialectic interchange of different ideas on the nature of reality is missing. Mere measurement sessions without knowing clearly what is searched for is an almost totally useless and time-consuming operation. This shows, therefore, that mutual collaboration is the only way to approach these difficult problems posed by the nature surrounding us, where different ideas and procedures can converge together and the true aspects of importance of the investigated problem can be accurately selected in order to create an efficacious focused approach towards the final scientific solution. 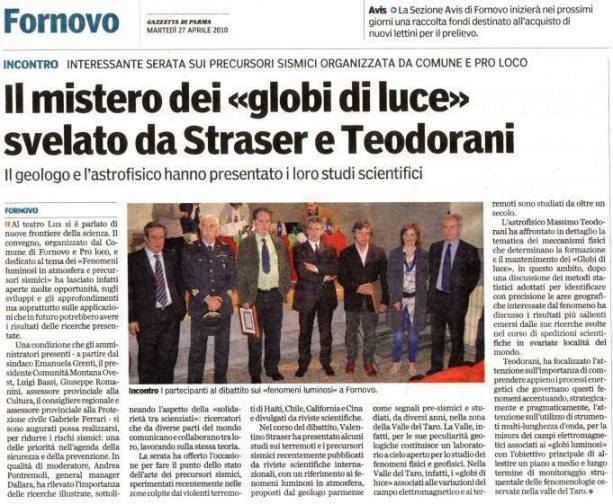